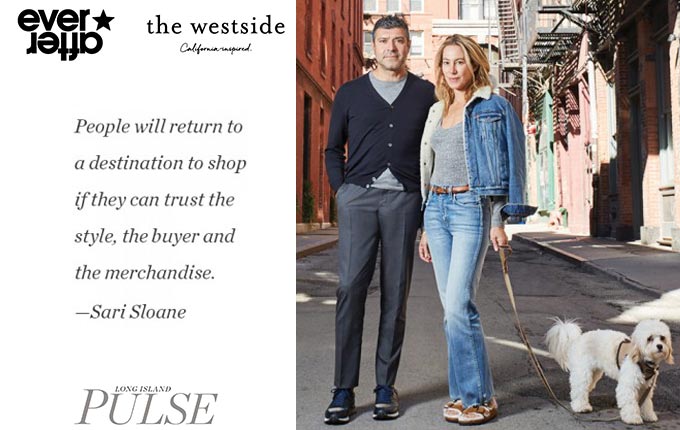 Sari Sloane has never been afraid to take risks—in fact, it’s the key to her success. Once a Wall Street analyst, she made a drastic career change when she left to become a buyer at Bergdorf Goodman. While there, she designed her own line of embroidered sweaters, Sari Cashmere, selling them at Bergdorf’s before leaving to grow the collection. When the Long Island native landed an account with fashion brand Intermix, it led to her 15-year stint as the retailer’s fashion director, where she became known for her market-savvy, trend-setting style.

“When I joined Intermix there were five stores,” recalled Sloane, who married Intermix co-founder Haro Keledjian in 2008. “By the time we sold to The Gap [in 2013] there were 32…I’m not afraid of taking a chance. While other retailers were more staid and continued with the bestseller, we always tried new things and it worked.”

Living in New York City while raising three girls, Sloane and Keledjian noticed a void in the kid’s market: There wasn’t a one-stop shopping destination to buy clothing and accessories for school, weekend and vacation. The couple opened the Tribeca boutique Everafter in April. Like Intermix, the store includes Sloane’s curation of high-end and emerging designers—but it’s geared toward school-aged kids. They’ve recently added locations on the Upper East Side and at Wheatley Plaza. “It’s a localized, comfortable but luxurious atmosphere with items ranging from $8 to $400,” noted co-founder Keledjian, who’s in charge of operations. “From the star and thunderbolt packaging to the in-store events, shopping at Everafter is about having fun.”

After filling a niche for tweens, they decided to work on Sloane’s passion project for adults: The Westside. Her vision for the boutique was laid-back yet luxurious lifestyle basics for both sexes. Located next door to Everafter at Wheatley Plaza, the store has a California vibe featuring denim, tees, cashmere sweaters, candles, apothecary and accessories. “As I’ve had children, my lifestyle has moved into the world of casual chic dressing,” said Sloane, creative director of both stores. “It’s more about great fabrics and comfort.”

On the heels of the Wheatley Plaza store openings, Sloane took us inside her dream realized.

What inspires your love of fashion?
Traveling all over the world inspires me. I want to take that feeling of newness and dress for it. It could be Bali or Austin—it doesn’t have to be the most far, exotic place. For The Westside, I was really inspired by Malibu and Venice Beach. Different seasons will bring different inspirations, but for resort wear it was Greece, at a Bohemian yet luxurious destination stop.

What are your fall picks from The Westside?
It’s all about being comfortable while still looking modern: a cashmere sweater matched to the perfect pair of jeans by Frame or Re/Done and sweats with an AMO T-shirt are a couple of our favorite looks. This season there’s a lot of red, plaid and Navajo prints.

How does Everafter differ from a store like Gap Kids?
We are a curated kid’s store with a broad and unique selection of clothes. We offer different designers, looks and price points. There’s a great mix of high to low from Stella McCartney to Stoney Clover Lane accessories. The kids love trying clothes on in our big dressing rooms. We also have an interactive photo booth that allows you to Boomerang pics to your phone to post on Instagram.

What did the Intermix experience teach you?
People will return to a destination to shop if they can trust the style, the buyer and the merchandise. It’s about having a really well edited assortment and service and staff are really important.

Why did you choose Wheatley Plaza?
We’d like to be a neighborhood destination. If we want to cater to the locals doing their errands, dropping kids at dance class or going to the hair salon, then Wheatley is where we want to be.